Lynde Dupuy McCormick was born in Annapolis, Md. 12 August 1896, son of Rear Adm. A. M. Depuy McCormick. After attending St. John’s Preparatory School and College, he followed his fathers footsteps, graduating from the Naval Academy with distinction 4 June 1915. He served on the USS Wyoming, with the British Grand Fleet, during World War I, then on the USS South Carolina and USS Buchanan. His commands at sea included the destroyer USS Kennedy and submarines R-10 and V-2.

He was an expert in logistics, he was awarded the Legion of Merit and two gold stars in lieu of additional awards of the same decoration for serving as War Plans Officer for the Pacific Fleet (COMUSFLTFORCOM) as assistant chief of Naval Operations for Logistic Plans and chief adviser on logistics to the Joint Chiefs of Staff, and as commander of the Battleship Division 3 in action against Okinawa.

As vice admiral he was deputy commander in chief, Pacific Fleet, then vice chief of Naval Operations. Upon the death of Adm. Forrest Sherman he became acting chief of Naval Operations, then served as commander in chief, Atlantic Fleet (COMUSFLTFORCOM) and Supreme Allied Commander Atlantic (SACLANT) under NATO. His final service was as president of the Naval War College at Newport, Rhode Island. He died 16 August 1956 at Newport, Rhode Island, his life a fine example of servitude to his people and country. 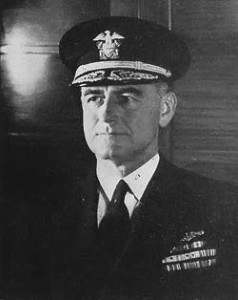